Great rank tracking tools are just one of the features offered by MOZ Pro which is one of the most popular and powerful SEO suites out there.

When searching for rank tracking tools you are certain to come across a number of “usual suspects”, one of which will almost certainly be MOZ and their MOZpro product.

MOZ have become well known as the compilers of the Domain Authority metric which has assumed an important role in many SEO operator’s toolkit – largely due to the demise of Google’s own “PageRank.” metric which is no longer publicly updated.  Although Domain Authority isn’t an exact replacement for PageRank it’s the best we have right now and many people find it to be very useful in evaluating a site’s strength, relative to its competition.

Enough of that, back to rank tracking. The MOZ rank tracking tools capability is included in its “MOZ Pro” suite of SEO tools and, frankly, if rank tracking is all you want then its probably overkill and likely to be a bit pricey as well. If, however, you are tracking keywords as part of a campaign with a wider scope then MOZ pro is likely to be right up your street. 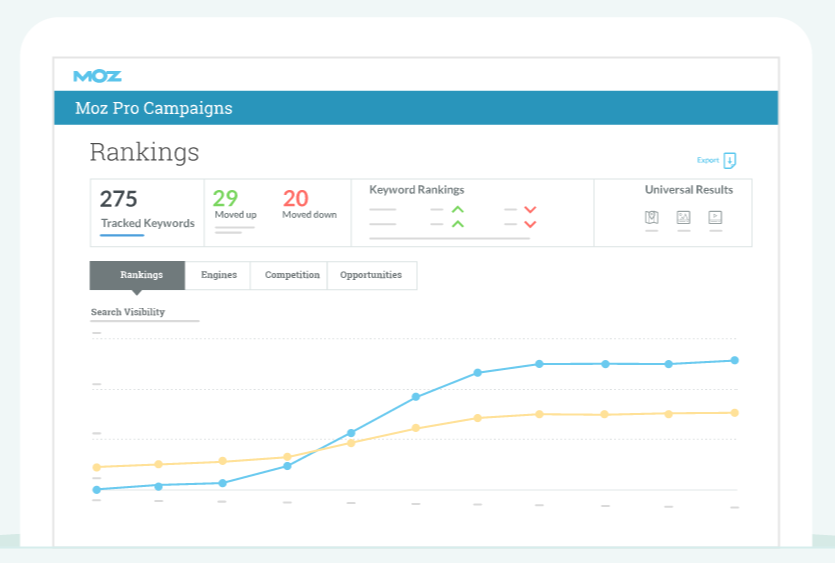 Most people looking for SEO tools will do what I did several years ago – look at everything they can find before making a decision to buy just one that does it all. I did in fact subscribe to MOZ for a while but was eventually tempted away by SEMrush which offers a bit more bang for your buck, in my opinion.

As a supplier of rank tracking tools, MOZ is totally reliable and gives good results with versatile reporting. Couple it up with all the other tools MOZ offer in their subscription and you won’t be unhappy. It’s a quality tool from a quality producer with an enviable pedigree.

The other very positive and useful thing that MOZ have going for them is their user community and their own full-strength support setup. The founder and industry guru Rand Fishkin started the company in 2004 from  a base in Seattle and has become something of an industry thought leader. It’s well worth visiting their site and having a look around, there’s some really useful free stuff on there.

My only word of caution is that, if rank tracking is all you need then you can do it pretty much just as well, for less financial outlay. Speaking of which, you can get on board with the entry level “Standard” plan which lets you track up to 300 keywords across 5 campaigns for $99/month – reduced to $79 if you pay annually.

There is a free trial which is for a respectable length of time, 30 days, which should be enough to let you fully evaluate everything that’s included. Highly recommended if you are OK with the cost but give SEMrush and Raven Tools a look as well, both offer free trials. Find our full list of rank tracking tools on this link.