TrueSocialMetrics is one of a new breed of software services to spring up online in response to the huge growth in Social Media by business users.

Truesocialmetrics has helped me to address a particular problem – it’s very easy, and indeed great fun, to jump in, eyes-closed, and to start having fun with social media. Many businesses approach their social media marketing in the same way that they would their own personal social media activity and they expect it to work for them, driving traffic and enquiries to their business.

The problem is that it doesn’t.

People often ask me why it is that, despite the fact that they are making dozens of Facebook posts each month and tweeting more often than a budgie on steroids, they do not seem to be gaining any significant benefit from all of that effort, in terms of extra business.

My answer is usually to ask them exactly what it is that they expected to happen – and then to explain why it is that it hasn’t.

The fundamental point to grasp here is that the number of posts or tweets that you make is not the point. The thing which really counts is whether anyone actually sees those posts and, if they do, whether they interact with them in any way, showing interest in what it is that you have to say. On Facebook that could be a “like” or a “Share” or, on Twitter, a “ReTweet” or a “Follow”

Google, and other search engines, will pay attention to social media pages that have a healthy following and a strong audience. this is measured by the level of influence on and interaction with an audience that any social media age demonstrates. The problem is, how can you measure all of that? The metrics that are required are not easy to come by but there are a number of services that can help you and the one I am looking at in this article is called TrueSocialMetrics.

TrueSocialMetrics is a social media reporting and analytics tool that enables you to analyse and report on the activities of almost any social media site – not only your own but those of your competitors too!

When you take your free trial of TruesocialMetrics you will be introduced to a new set of analytics that you may not have come across before. In addition to the number of posts, likes, followers and so on that you may already be used to, TruesocialMetrics introduces you to other, far more revealing numbers such as “Conversation” “Amplification” and “Applause” to help you to measure and analyse the real level of active engagement that users have with your Social Media Pages and those of your competitors. Here’s a screenshot of a typical TrueSocialMetrics dashboard:

Now you can take an in-depth look at whether your social media posts have evoked conversations and encouraged followers to share your information with others or perhaps encouraged them to “like” your top quality content? There are many graphs and charts available to help you to share this information with everyone who needs to know ho social Media is working for your business. 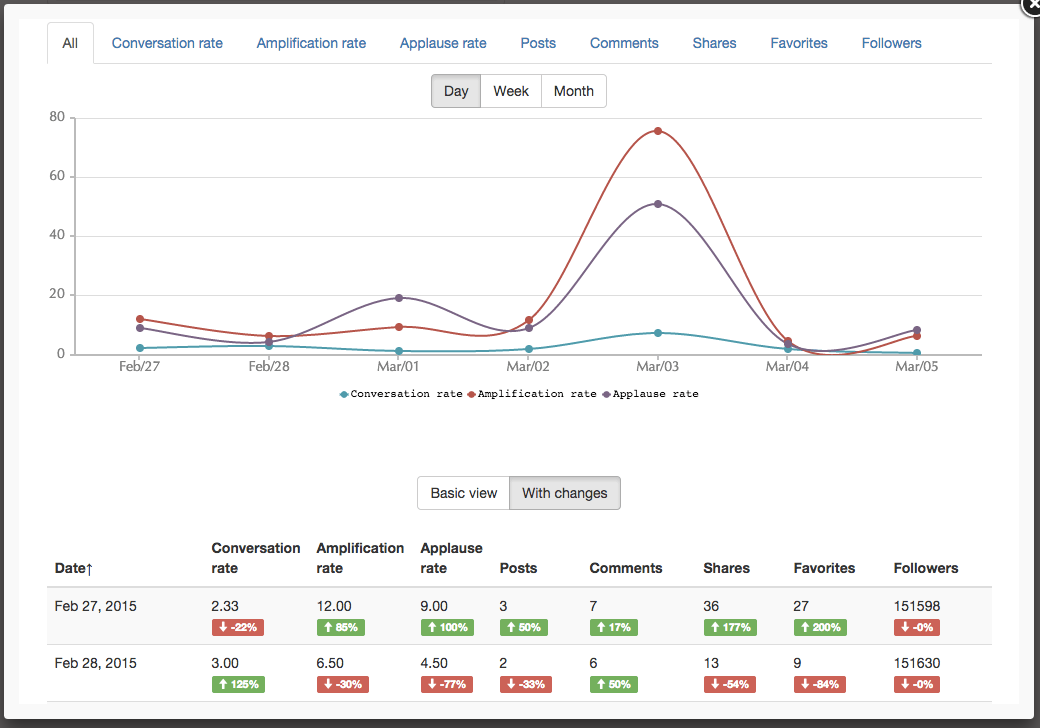 Yes, we get to see how many posts have been made and how often your posts have been shared or liked but this data goes much further than that. TruesocialMetrics actually provides analysis that lets you identify how much of an impact your social activity is having, and it does so with these metrics:

This is a measure of how many times, on average, your social posts have been shared. It is calculated by dividing the number of shares by the number of posts on any given platform in a given time-frame. So, in the screenshot above, the Amplification Rate for Twitter is 17.03, which means that on average each Tweet is shared 17 times whereas on Facebook the rate is much higher, at 201. That might mean that your activity is better suited to your Facebook audience or that the quality and style of Facebook posts is better, or at least different, to those you post to Twitter.

The Conversation Rate is arrived at by dividing the number of social shares by the number of posts, so a conversation rate of 7 means that, on average, your social posts receive 7 comments.

By dividing the number of Likes/Favourites by the number of posts made, you arrive at the Applause Rate which is a good indicator of how popular your social media activity is with your audience.

If you choose to link your account to your Google Analytics account then you can take data from your Goal Values in order to see what the economic value is for each site visit you gain from Social Media activity.

Using these metrics it is easier to identify those Social Media activities that bring you the best returns.

TrueSocialMetrics – Paid For – Or Free?

TrueSocialMetrics is a paid-for service but you can have a free 30 Day trial without obligation. If you do decide to sign up then it starts at $30 per month (Small, Standard option) and goes upwards, depending on the number of social media accounts you want to monitor – whether they be yours or your competitors. The $100/month option, for example, gives you a total of 10 accounts which means that you can monitor any of the included Social Media platforms for up to 10 accounts. There’s also a premium option that adds Pinterest, Google+ Community and Vine to the mix.

TrueSocialMetrics – Is It Worth It?

Compared to some services out there TrueSocialMetrics is relatively low priced so long as you only need to monitor a few accounts. If you are a small agency then you could find the bill racking up quite quickly and you may wish to look for alternatives. In addition to the analysis described above there are some very useful, and attractive charts produced and they are great for including into management reports and client updates.

Like all tools that are purchased on a subscription basis, TrueSocialMetrics represents a cost that, in most cases, would have to produce a return, each month, in order to justify making the payments. There’s very little in here that you couldn’t do yourself, if you had the time and the inclination but, for small businesses, $30 a month to keep on top of your Social Media activity and to start to gain some understanding as to how you might use it to increase your business, is small potatoes. For small marketing agencies, the package might not go quite far enough for the money they are asking, in order to produce a really worthwhile ROI.