Act-On is an Oregon-based provider of a nice looking suite of Digital Marketing Automation tools. 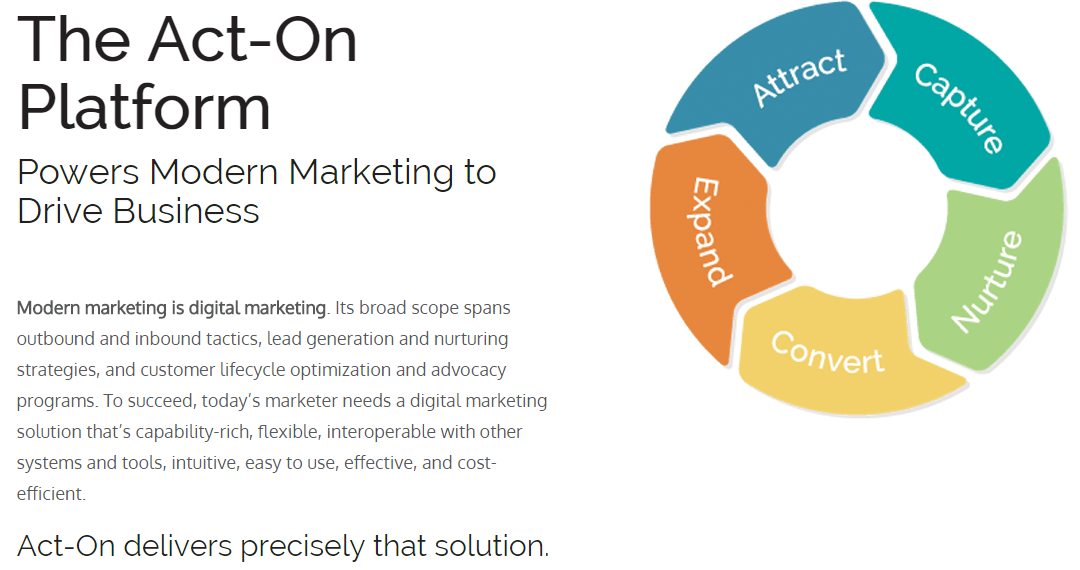 Act-On has placed itself firmly in the Digital Marketing automation space. Marketing Funnels and sophisticated automated email campaigns are becoming the life blood of many industries. The need to find new sales leads and constantly be developing them into customers who buy – and then keep on buying over a period of time known as the customer lifetime, is now more urgent than it ever has been.

There are quite a few all-in-one marketing automation platforms emerging now, some, like Infusionsoft, have been around for quite a while and, as a consequence, have quite a foothold in the market, but that doesn’t mean there isn’t room for new blood, like Act-On. That is especially true when the new kid in town comes with a few toys that the older guys don’t have.

Act-On does email automation as you would expect. From what I can see, and I haven’t done a full review type test yet, it does it fairly well but without, it seems, the campaign building flow-charting tool that Infusionsoft has. What it does have, however, are some clever Website Prospecting Tools which can track the activities of your website visitors to a much greater level of detail than is the case with Google Analytics.

It even has some of the facilities that you would otherwise have to install a system like Canddi or Lead Forensics for – the ability to identify site visitors in some cases and obtain their contact details. By doing that you can really build up a picture of what your visitors are doing when on your site and how to nurture their interest using some of the CRM type tools included in Act-On.

I was also pleased to see a useful Social Media Marketing toolset in the Act-On toolbox – something that is still missing from Infusionsoft’s line-up.

Now it’s no secret that I am a seasoned Infusionsoft fan and I personally know of hundreds, if not thousands, of automated marketing campaigns that have been successfully managed with its superb campaign builder and email facilities but Act-On is pretty close, and does offer more functionality – I expect to see more people opting for its more intuitive and easy to look at interface before too long.

In most cases, I can’t see how an organisation can do a proper job of implementing a fully-rounded Digital Marketing Strategy without some kind of Marketing Automation Tool and finding the right one is not a trivial task.

The only thing that will stop Act-On from becoming mega is the cost and the sheer fire-power of the opposition. It’s fine for larger companies but completely out of the ball park for the average startup or SME who are, ironically, the ones who need it most. I’m not saying it isn’t good value for money – it’s just that the entry point is too high for it to have mass appeal yet not quite high enough to put it up there with the major players.

Talking of pricing, the starting point for a chopped down version of the system and capacity for up to 1000 contacts is $600. The next  step up, where you get to play with all the toys, is a cool $2000 – much higher than Infusionsoft and, frankly, as far as email marketing goes at least, not as good, as far as I can tell although we haven’t has the opportunity to carry out a full Act-On review at the time of writing. If you did upgrade to the $2000/month advanced option that would still only buy you space for 10,000 contacts and as you may know, that’s small potatoes when it comes to serious marketing lists.

A final note on pricing is that Act-On seem to expect you to pay for a year in advance but offers no discount in exchange for you doing so – not very helpful to SME’s with their limited marketing budgets and constrained cashflows but great for Act-On‘s own cashflow, of course.

If, on the other hand, you are in an organisation where there is a decent marketing budget and you’re looking for a solution that stops short of the silly money options like Hubspot, Pardot, (Salesforce’s product) & Marketo, then Act-On could be the one for you. They don’t mention a free trial but if you dangle a purchase order in front of them, who knows?

Where To Find It
https://www.act-on.com
Product Type
Digital Marketing Automation Platform
Paid/Free
Paid, Various Options
Free Trial Available
No
Price
From $600/month for up to 1000 contacts.