ConvertKit is an email marketing platform that has built its reputation as being the go-to email provider for professional bloggers.

One of the claims made by ConvertKit on their website is that their product has “The power of Infusionsoft, but easier to use than MailChimp.” That’s a bold claim because Infusionsoft is very powerful indeed and is the email automation “engine” that sits behind many high-powered and often complex email marketing campaigns.

So, is it true? How Powerful is ConvertKit

Well, the thing that makes Infusionsoft so powerful is its campaign builder. Drag and drop flowchart or workflow based schematic campaign building that can deal with almost any kind of email marketing automation rules. Does ConvertKit have that – no. However, it does have a rules-based automation system which is, in itself, powerful and effective. The main selling point is that their system gives you all the power of systems like Infusionsoft but is simpler to use. 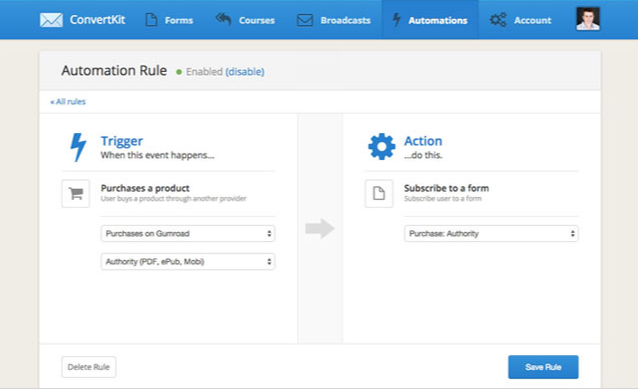 When this happens – do that. Rule based email automation.

ConvertKit isn’t just about email marketing and automation though. There are lots of other features that will make it attractive not only to bloggers, at whom it is primarily aimed, but also to  a wider spectrum of internet publishers. These include Form Building, a Landing Page Builder, a Book Marketing tool and a wide range of pre-built integrations.

Integrations are a vital part of a system like this and all the names you’d expect to see are there including e-commerce providers like Shopify and Woocommerce, lead capture services like Unbounce and Leadpages and membership system such as Member Mouse and Rainmaker. Other services can be integrated using zapier for which there is also support.

My personal take on this is that ConvertKit provides the facilities and resources that email marketers, and of course bloggers, need but in a more accessible and easy-to-use way than Infusionsoft and some of the higher-end packages like Marketo and Hubspot. It’s also significantly cheaper – at least for those with modest numbers of contacts on their list.

The entry level plan starts at $29/month and gives you storage for up to 1000 contacts. You can send unlimited emails to your contacts on any of their plans – even the cheapest. The price does rise as the size of your mailing list increases but that is pretty much standard practice and even if you reach the dizzying heights of a 5K opted-in list you’ll only pay $79/month. Beyond that, however, the price is not published and, in reality, most email marketers need to have lists that are substantially bigger than 5K contacts so if you have, or intend to have, a really large list it would be best to get a quote first.

We haven’t carried out a full-feature ConvertKit review yet but plan to do so – see the review button on the right for updates on that.