ReportGarden is a comprehensive and versatile SEO reporting tool and dashboard platform which is aimed at both in-house marketers and digital marketing agencies alike. 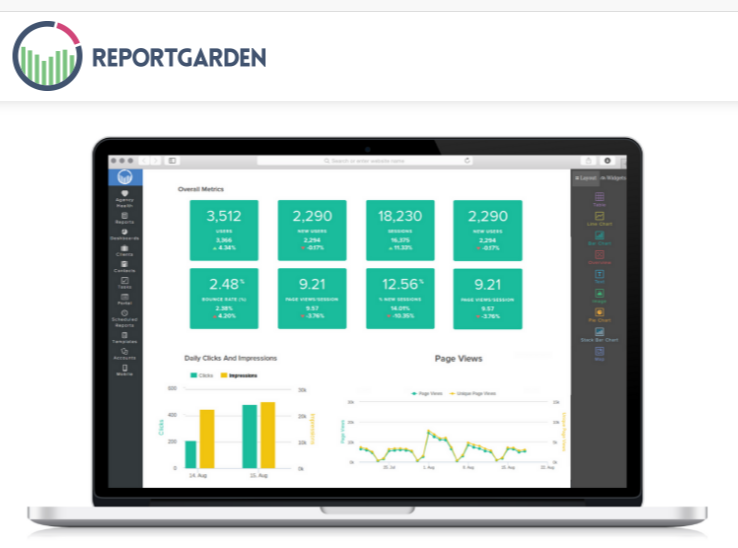 ReportGarden has some nice dashboards and reports but how much does it add to existing sources of this data?

At first glance you’d have to admit that ReportGarden seems to have a lot to offer. A mix of reporting and dashboard tools that can accept data from a reasonably wide number of sources and report in ways which make the data accessible to everyone from marketers to managers alike. The emphasis is on visually appealing graph based reporting which is actually what most people want

So just what is included in ReportGarden’s toolbox?

There’s also a keyword rank tracking tool and a backlinks checker included in the ReportGarden platform. White label reporting is also included to enable you to prepare reports for your clients which look as though you’ve done all the work yourself.

Building reports with ReportGarden is about as straighforward as it can be and does not require the operator to use or know any code. Templates are provided for several different report types and make the job much easier than for example, Google Analytics.

In terms of cost, ReportGarden does a lot, but not quite enough, in my view, to justify the kind of monthly subscriptions they are charging. For a fairly basic plan, with no social media capability, it is $49/month and the one that most people would need if they were doing client work, the Agency Plan, is $169/month.

ReportGarden do offer a (fairly mean) 7 day free trial, barely enough to put it through its paces in my opinion, so I would suggest that you set some time aside and check that out before signing on the dotted, so that you can be sure that ReportGarden is going to give you everything that you need.

Also look at Cyfe – a low cost report / dashboard tool that comes with a huge amount of data source widgets.